The central focus of our research is regulation of the genome through epigenetic mechanisms including how stimuli (e.g., parabiosis, viral infection, diet, early life adversity) cause persistent epigenome changes that effect cellular function throughout life. We use a combination of transgenic mouse approaches (NuTRAP), next generation sequencing, and bioinformatic methods to understand epigenetic processes within specific CNS cell populations (microglia, astrocytes, neurons). Similarly, we examine accumulation of mutations and deletions to the mitochondrial genome with aging and diabetes; pairing these measurements to assessments of mitochondrial function. Our scientific advances over the past decade in aging research have been: a) identifying that the majority of age-related CNS epigenomic changes are sexually divergent; b) disproving the genomic hypomethylation with aging hypothesis; c) determining that, from a molecular neurobiology perspective, cognitive decline is associated with activation of specific pathways (e.g., Nogo signaling) and is not simply a more aged phenotype; d) periods of poor glycemic control cause CNS epigenomic changes that do not normalize with re-establishment of normoglycemia; e) development of a series of novel epigenomic sequencing tools. Our long-term goal is to mechanistically alter the epigenome to maintain healthy brain function and prevent the neuroinflammation with aging.

Epigenetic processes, including DNA modifications, are one of the ‘7 hallmarks’ of aging, but their role in brain aging is not understood. The effects of DNA modifications on genome accessibility and gene expression depend on the type of modification, methylation (mC)/hydroxymethylation (hmC), and cytosine context [CG or non-CG (i.e., CH, H=A,C,or T)]. Recent studies of DNA methylation demonstrate altered methylation with cellular dysfunction, aging, and pro-longevity therapies. However, these studies did not examine the brain and generally only included male subjects. In our studies we have been examining the epigenomic response with brain aging and have found that it is unlike those observed in mitotic tissues (e.g., muscle, liver).  Over the last two years we have demonstrated that mCH is the predominant form of methylation changes with age, age-related mC and hmC changes are primarily sexually divergent, cell type-specific, sexually divergent gene expression programs with aging, and prevention of age-related mCG and mCH changes by life-long caloric restriction. Our current studies are moving these findings forward by examining specific cellular populations in the CNS, such as neurons, astrocytes, and microglia. Currently it is unknown if different cell types present a unique pattern of epigenomic changes or respond similarly. In these studies we are identifying changes in mC and hmC in CG and CH contexts genome-wide in specific CNS cell types from both sexes with aging, determining whether age-associated neuroepigenomic changes can be reversed to restore a ‘youthful’ pattern, identifing the regulatory mechanisms that target DNA modification changes to specific genomic locations, and determining how mC/hmC alters gene expression in a cell-specific fashion. With this knowledge, the field will move from correlative studies to mechanistic testing that unravels the function of epigenetic changes and the pathways targeting epigenetic alterations to these genomic regions. 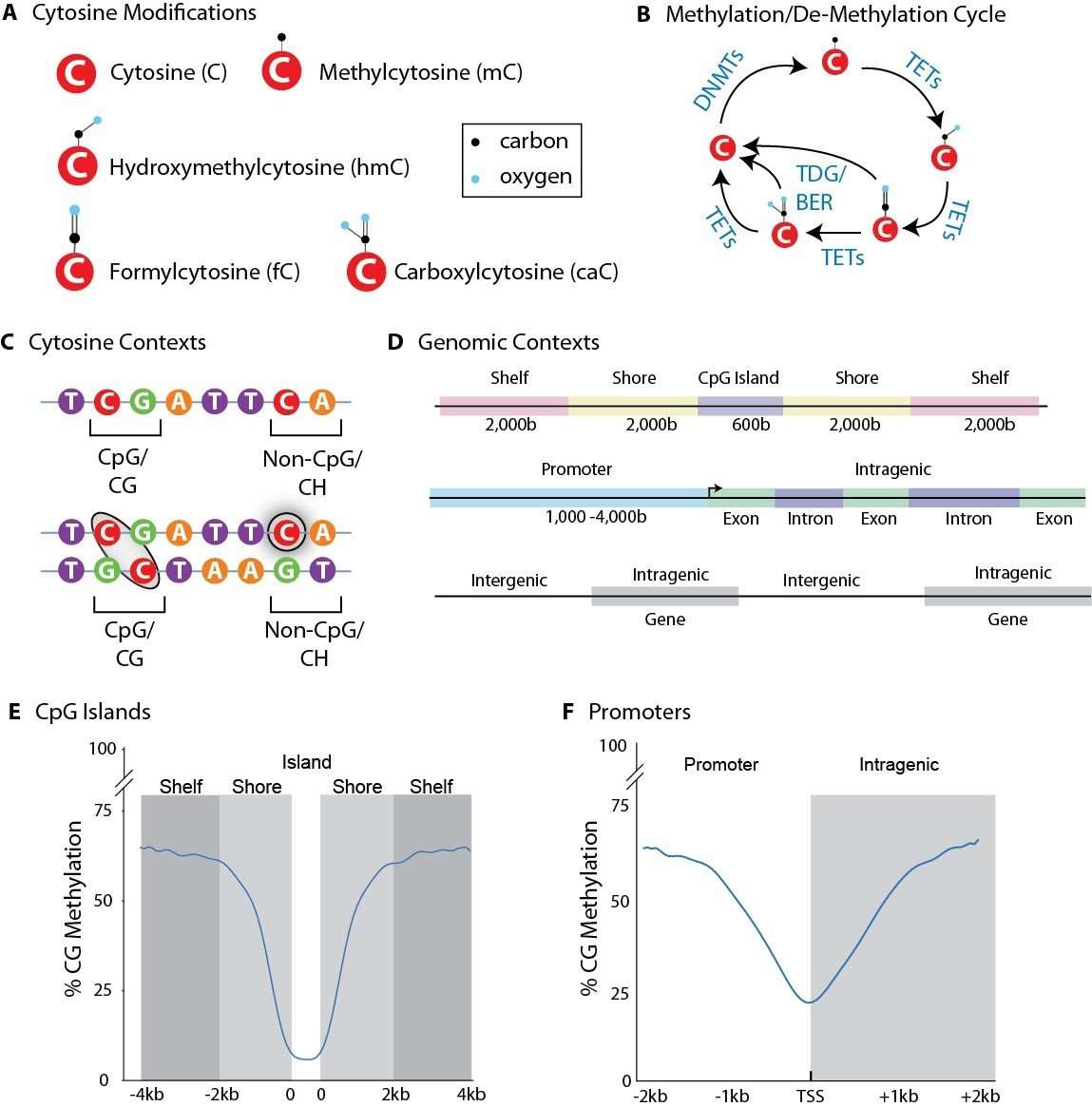 Fundamental principles of DNA modifications. a Cytosine bases exist in an unmodified form and with methyl, hydroxymethyl, formyl, and carboxy additions at the five positions of the pyrimidine ring. b Over the last decade, advances in the understanding of modification regulation have characterized the cycle of modification addition and oxidation. DNA methyltransferases (DNMTs) add methyl groups in which Tet methylcytosine dioxygenases (TETs) sequentially oxidize modifications back to an unmodified cytosine or include base excision repair (BER) through thymine DNA glycosylase (TDG). c Cytosines are present in palindromic CG contexts with methylation paralleled between the two strands while CH (where H is A, C, or T) modifications are by nature strand specific. d Changes in DNA modifications can occur across different forms of genomic elements with differing functional outcomes. CpG islands are areas of high CG density that are flanked by shore and shelf regions upstream and downstream. Similarly, methylation of promoter regions has traditionally been a focus but intragenic regions, either in exons or introns are an area of growing interest and play a role in gene expression regulation.